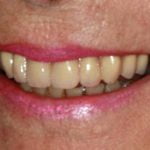 Sharron just can’t stop smiling ….. and everyone has noticed.

The 62 year-old has found a new lease of life and renewed confidence after treatment at one80dental centre for advanced dentistry.

“I can’t believe what a difference this had made to my life. I just feel so much more confident”

Sharron had become terribly self-conscious after being fitted with a temporary top denture following the failure of long-standing bridge work.

“It was just awful. It was always loose and wobbly and I was so frightened that it would fall out. I was very self-conscious,” she said.

“It was horrible eating with a lump of plastic in your mouth anyway. It changes the taste and it completely takes the pleasure away from food and eating with family and friends.

“It really affected me mentally, my self-confidence. I look at photos and I hardly ever smiled, and if I did, it was always with my mouth closed.”

Sharron was referred to one80dental principal Nigel Rosenbaum by her own dentist. She was extremely nervous and apprehensive ahead of that first visit in October 2014.

But within minutes of arriving at the purpose-designed centre on Baslow Road in Totley, Sheffield, Sharron was put at her ease.

“It’s the whole ambience of the place which is just so reassuring, professional and friendly,” she added.

“And Nigel is just wonderful. He is so calm and reassuring. You instantly feel that you are in the hands of someone who not only clearly knows what they are doing but also cares about you.”

Sharron initially wanted the ‘perfect Hollywood smile’ but was persuaded to go for something that looks far more natural – and could not be happier.

After consultation and discussions regarding her treatment options, she had her remaining upper teeth extracted and replaced with five implants, a process that was entirely pain free.

One80dental is one of only a handful of practices in the country that has a consultant anaesthetist to provide conscious sedation for patients undergoing complex or lengthy dental procedures as well as those who are very nervous.

“I did not feel a thing,” added Sharron. “I was sedated but you don’t actually go to sleep and I don’t really remember anything about the procedure.

“It was all done in a day and even the temporary bridge Nigel fitted to the implants was such an improvement.”

Sharron has now had the permanent bridge fitted and still cannot believe the difference it has made to her life.

“After it was done I held the mirror up to my face and just cried because the result was just so amazing.

“I feel so much more confident. It has changed the shape of my face and people keep telling me how fantastic I look. The difference to the way I was before to the way I am now is just astronomical.”

Five reasons why you should visit your dental hygienist regularly.
30th July 2019