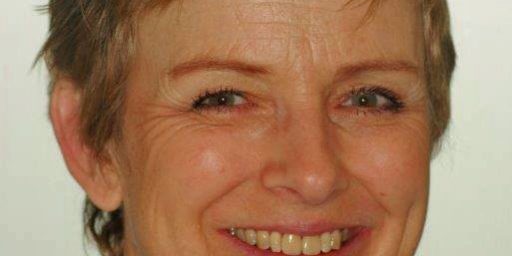 Katie after her implants

Katie before the implants

We were skiing in France when a beginner collided with me and, along with suffering a broken wrist, his shoulder went into my mouth and, although I didn’t know it at the time, knocked my two front teeth out.

One was completely out and one looked like a knocked over gate post. Luckily my husband had read somewhere that the best thing to do is to push the teeth back into their sockets which is what he did.

The dentists in France and here said he did exactly the right thing but there was no certainty that the teeth would survive such a trauma.

The teeth were splinted for three weeks whilst they ‘retook’ and then my dentist monitored them every six months to see if they had been saved. Unfortunately after 18 months, one started showing signs that the root was being eaten away and there was absolutely nothing that could be done to save it.

After talking to my dentist we decided that the best result would be a referral to an implantologist to discuss possible options for treatment. I had visited the dentist regularly since childhood and had only ever had one filling in my life before this happened, so this was a major thing and totally unexpected.

I met Nigel in November 2014 and he drew up a treatment plan setting out all the options available to me. It was reassuring to see these and to have all the information I needed to make an informed choice.

I felt very confident that whatever option I chose, Nigel and the team would ensure the best possible outcome for me. I decided to opt for having two implants done of both my top front teeth.

I could have had one done but then still be living with the anxiety that the second one might die and I just wanted an end to what had been a horrible period.

It was always there at the back of my mind. I could not eat properly and would avoid quite a lot of foods. It was a worry the whole time that my teeth could come out at any moment.

You are always very conscious about your smile and I felt that people were looking at these slightly wonky teeth all the time.

You take for granted how you speak but when something like this happens you suddenly become very aware of it. I hadn’t realised before how great a part your teeth play in forming certain sounds.

At the initial surgery in February 2015, temporary crowns were fitted which, as I was working abroad, I wore for five months. Nigel made them to match my own teeth to encourage the gums to heal in the most natural shape around the new “teeth” without any tell-tale gaps.

This was very important given that the implants were for my front teeth and my gumline is visible when I smile. This also enabled me to avoid having to wear a denture!

When I came back for a progress check-up Nigel was able to take the impressions for the final implants which were permanently fitted in July 2015 when I returned for my son’s graduation.

He has been brilliant and the result is better than I could have hoped for. The implants match my own teeth perfectly and there is such pleasure now in eating what I like again and just not having the stress of thinking ‘will they fall out’ all the time is such a relief.

It has given me my self-confidence back which is priceless – and yes I’ve been back skiing!

Five reasons why you should visit your dental hygienist regularly.
30th July 2019